Finally, all the parts come together. Look at my previous posts for all the pieces to building the LilDevil network monitor and enumeration tool.

So this tool I created sits on a Raspberry Pi. Its purpose is to monitor and enumerate all devices currently connected to a network. In this case, it sits on my Guest network. Tomato Shibby is running on my router and I used its web interface to setup the network, along with limiting access. For all guests jointing this network, they are warned by the router’s splash page that tools such as this will be running. Its a free network and they really can’t expect anything different going on. In this case, its not malicious, but it is good practice to be wary of guest networks.

To be less suspicious, the hostname of the Raspberry Pi is RainbowDash 😉 This amuses me so much, the perfect disguise! If I saw a device named LilDevil running on a guest network I would be totally alarmed. I also themed the Pi accordingly, see the below screenshot. The coloring isn’t perfect, I blame VNC. 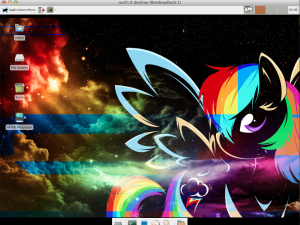 The Pi runs a Django Restful server that stores mmap scan information about detected machines on the network. The Python 2.7 scripts for this are here. I had to make a few versions in order for things to work on Django 1.6.

Also, I had to make some changes in dirtBag.py, in order to get the ping sweep to work appropriate.

Change MIN and MAX to an integer instead of a string.

Here is a copy of the new main function.

The information is up to date on all devices currently connected. It may be nice in the future to include a log of all scans but for now, I’m really only interested in connected machines.

Data is then displayed in a visible GUI. The below screenshot shows the tool windows along with the GUI. Currently, no devices were connected to the network. 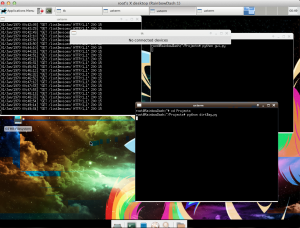 Ahhh it detected a device… in this case, itself. 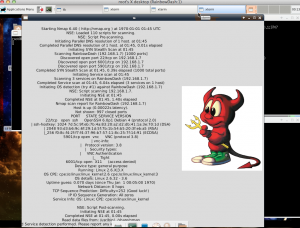 There you have it! A portable network enumeration tool. There are so many versions of this everywhere, but this is just something I coded up for fun. I plan to add to the Pi later for kicks.

So I wasn’t too happy with the kludginess of the network monitoring tool that I posted about earlier this week. It lagged and really wasn’t an ideal tool. I decided to redesign the entire model.

Here is how they connect. The Ping/Enumeration Script, pings all devices given within a network range. Whenever it finds a new device, it runs a NMAP scan on the device then formulates a request to the server to notify it of the device scan results. The script will also notify the server when a device disconnects from the network (this was an issue with the old version).

The Django server manages a sqlite database containing scan results on all devices currently connected to the network. It will remove or add a device record based on the ping script’s RESTful HTTP request. The server can also return a list of all devices detected. This list is used by the GUI script.

The GUI script maintains a Tkinter dialog window that will circulate through all network connected device scan results. It first sends a GET request to the Django server asking for a JSON list of all connected devices. The script will then display each record found in the JSON. Each device record will appear in the GUI window for 20 seconds. After it has made the rounds through each item, it will make another call to the server for a fresh JSON to iterate through.

The Ping/Enumeration Script is basically the same as what I discussed earlier. The difference is, after data is collected, it is sent to the Django server in a POST request.

Django is an awesome Python Web Application Framework that I absolutely adore (not the movie 🙂 ). It is known as the web framework for perfectionists with deadlines. Most of my web projects utilize Django.

It comes with its own lightweight server to host its applications, so its perfect for any development environment. For the sake of this project, I’m using its server, all script/server functionality is limited to the host machine running the tool. Everything is internal. Django also handles the RESTful routing and database modeling. It uses the model view controller (MVC) structure. Here is a great tutorial on how to create your own Django app, definitely worth looking into!

The following is the break down of code I wrote for the Django server (running version 1.3).

Finally, the GUI script. Very similar to the one in the old post. Again, I just added the ability to request device data from the server.

Final Note: Make sure to delete/clear out database or old results will carry over! I did this in an init.d script that calls the service.

Put it all together and you have a much more stable tool. I renamed it from the Hindenburg to the Lil Devil.

UPDATE: I made a better version of this tool with server implementation here.

Today I felt like building a python 2.7 script that would enumerate a network along with alert me to the presence of a new device.

I limited my project to functions in the standard library.

So something lightweight and okay fast is a ping sweep. From an early post I included the Linux command for a sweep. I used this command along with the python commands to execute the ping sweep along with storing the results in a variable.

Following, I used some regular expressions to pull out the IP addresses detected in a given prefix range.

Put that in a loop with some comparison data and you have a script that prints an alert whenever a new device is detected.

There are a few short comings in the code but that’s the basic idea.

Now take this further, I hooked it up to a GUI with enumeration information! The new beastly application constantly flips through NMAP scan results of devices found connected to the network and displays the results in a GUI. I even placed a picture in the GUI. I call this app, the Hindenburg, its kind of hacked together.

It’s ideal for an environment where it can just sit on the screen without much of any type of activity going on. If you are enumerating the entire network, there will be a lag… it happens.

Nmap is an effective network-scanning tool that can be used for host and open port service discovery. It can be downloaded from here.

In my experiences, to find hidden services or special services, not located on common ports, the below scans can be used. Different services respond to different packet messages. The “-p” tag specifies a port range, it is not required. However, when I stated the range, I found more running services than when the range was not stated. My theory is nmap, on a basic scan will look at popular ports and not necessarily all ports when not stated.

nmap is a great tool to use to perform a network ping sweep, however there is an effective way to perform a ping sweep with out any additional installation. A FOR loop can be used to perform consecutive pings.

The FOR loop is basically saying start at a network prefix with stated starting host number value and send a ping. Once a reply as been received the first loop is finished and it continues to the next loop. After each loop, the host number increases and a ping is sent to that address on the network. For example, say the network prefix is 192.168.0 and we want to ping host numbers (3-43). We would enter 3 as our beginning host number and 43 as are finishing host number. The one in between the two parameters states to increase each address by one for each running of the for loop. This allows us to ping each host on the the specified network range, thus performing a ping sweep.

The same function can be done in the Linux Terminal.

Linux is slightly different but follows almost the same pattern.